A couple years back I participate in the kick starter campaign for the launch o the CineStill 800 medium format film. I ended up (with a slight delay) with a nice T shirt ( (I spare you the picture for the time being) and a few rolls old the said film.

I have already shot a few rolls and I must think of going through the reminder before they expire. The Hassie also did not get much action this year so I loaded a roll when I went to the Leica User Group Singapore outing to the Red Hill market area.

Above is the best shot of the roll. This lady sing sings the market for the greatest pleasure of the people around. The film was rated at 640 ISO, the day was a bit overcast but most shots were done about F11 1/250.

This is the seventh month of the Chinese year and it is the time were the dead visit the world of the livings and displays of religious artifacts as above are common over Singapore, to please them and let them go back in peace.

We also took a tour of the Red Hill close estate, a public housing estate set for redevelopment.

I did not manage to shot the whole 12 frames in  the morning, so I went last week in Chinatown to finish the roll on the lantern festival. I shot the remaining frames at F4 1/60s.

The above is quite OK, the below is not. It is seems a bit difficult for me to measure the light for this kind of scene.

The film was scanned with Silverfast and Epson v800, with bit of white balance and contrast and exposure adjustment in Lightroom.

Advertisement
Another roll of Cinestill 800

This has been more than two years since I was offered the Lomo Konstruktor kit by my wife and my son. It took me 2 month to complete and shoot the first roll and actually it took another two years for me to shoot a second roll.

There are a couple of reasons for this none might be very good nor definitive, but here they are.

I first found the Konstruktor very flimsy.  The winding is very hard (hence the frames overlapping, or extra spacing), the shutter mechanism is quite hard to press causing camera shake more often than not.

The F10 lens and 1/80s speed are only allow well lit scenes; my first roll for 400 ISO and a few of the pictures were underexposed. I had a try this time with a 800 ISO Fuji Extra, and some shots are over exposed but all in all that’s not too bad.

I found the framing and focusing difficult, ok focusing a F10 lens is not that critical after all.

Finally I have enough sh*t cameras a home and the Lomo does not bring anything really new. It’s back on the shelf now, it may stay there for a little while.

THE SECOND FILM WITH THE LOMO KONSTRUKTOR.

One of the members of the Lugs (Leica user group Singapore) and prominent film shooter has ordered a bulk of Fuji Superia 800 and offered to share them. So even if I’m not a Fuji guy myself I picked up the occasion and snapped 12 rolls of 24 shots a 5 SGD a piece.

We met last week with his gang at Brawn & Brains café and had a nice meet up session, discussing gear, film and shooting stories.

I brought along the Leica M6 with the Summaron 35mmF2.8, the fool proof combo I bought last year. A couple of nice camera were on the table, some Olympus, Minolta, Nikon and Leica of course.

Heading back home I met junior at the skate park and had him pause.

The 24 shots were quickly finished in the afternoon, my dad use to favor them over 36 as you could finish them quicker, but also that in a time where you had to pay for the prints  doing extra useless shots was not an obvious choice.

One friend said yesterday that he dreaded two things in Singapore, the haze and the formula one. Well we may skip the haze this year but formula one is upon us.

I must say I am quire disappointed wit this shot. Not only did the big baboon insisted to be next to miss formula one, but the light is poor and the color is so so, making me remind that I don’t like Fuji colors.

I must say the colors for these indoor shots are quite nice, and those of the skate park are ok as well (a bit less nice). The pictures are quite grainy, is it the film or an effect of the exposure I do not know. Well I have 11 rolls left so I can load them in many different cameras over the coming weeks and see what I get. 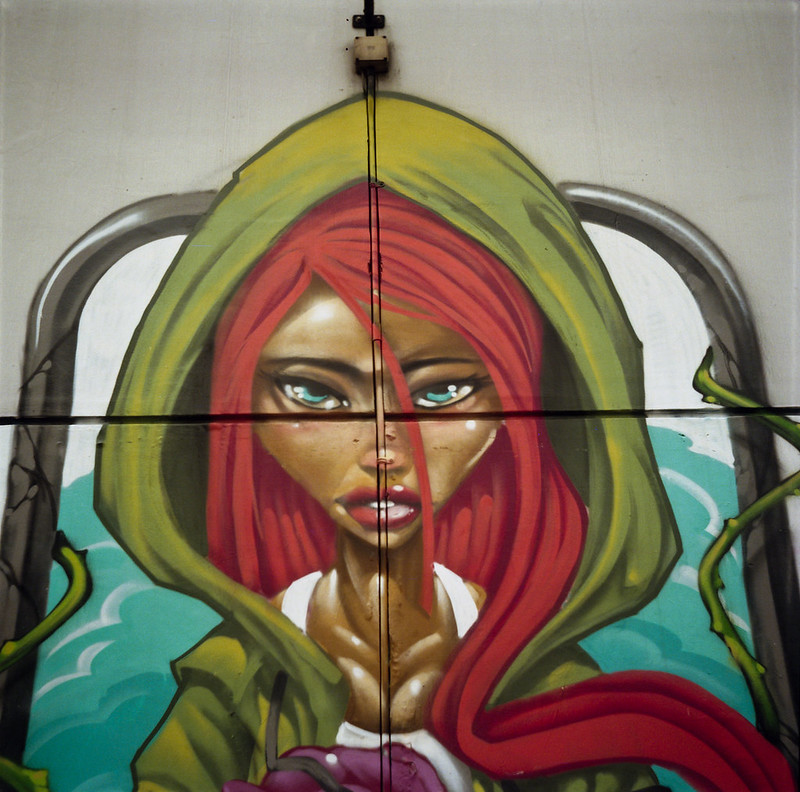 The famous Lavender Food square is now closed and demolition work has began. It will be replaced by a 30 levels commercial and habitation building. At the moment it is the opportunity for street artists to show their talent. 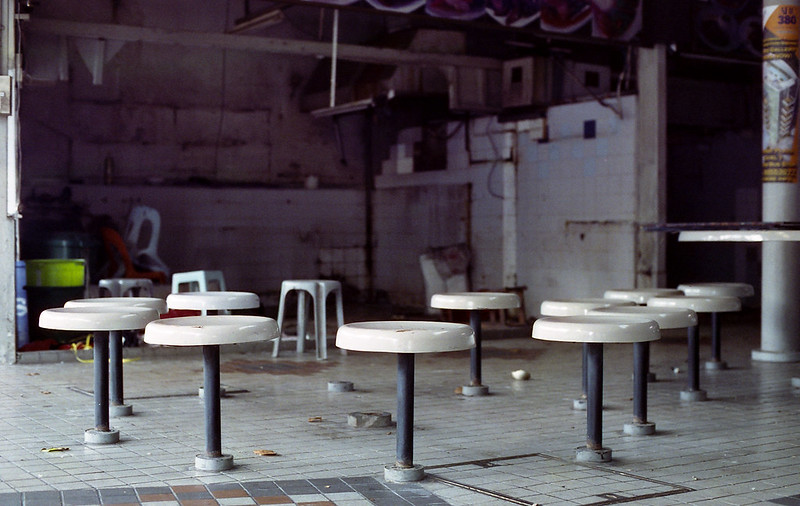 A few weeks before I happen to be there already; at the right place a the right moment. I just pass by the Lavender food square when the demolition work started, but I was still able to walk through. 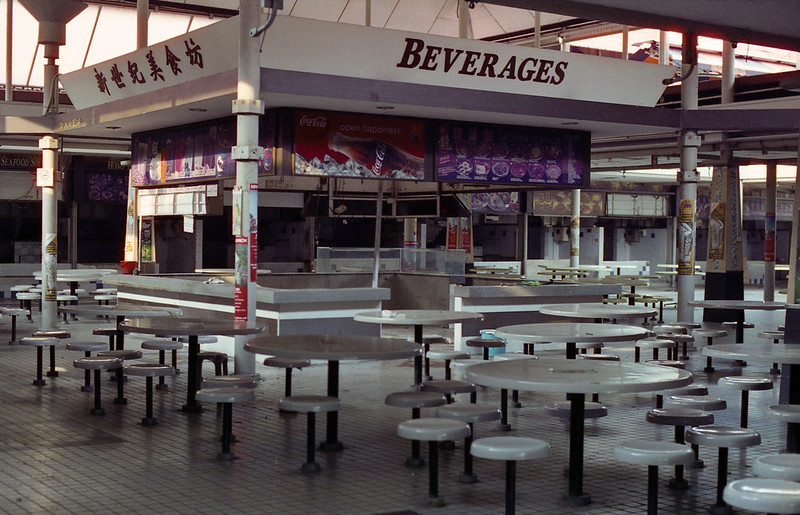 This was my first Roll with CineStill 800. It’s not bad, I think I like it. But a bit expensive for casual shooting though. Also the AF of the Nikon F4s seems to be broken so I had to use a manual focus lens which defeats the purpose of having such a huge camera. 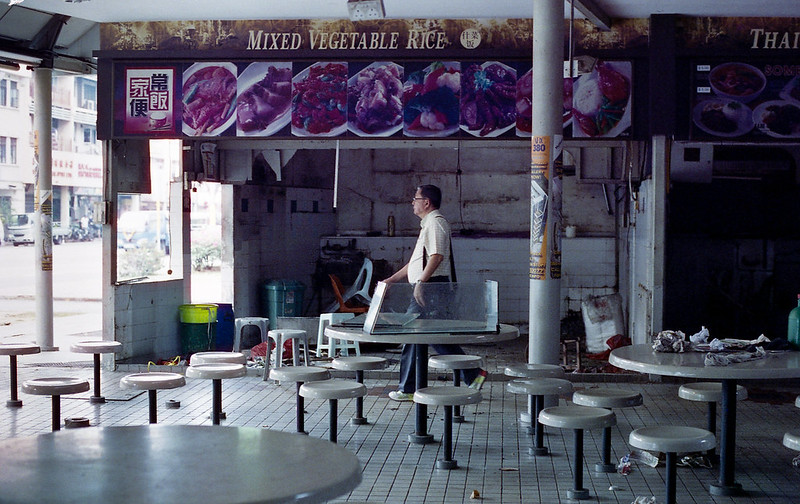 A last customer for the Mixed vegetable rice 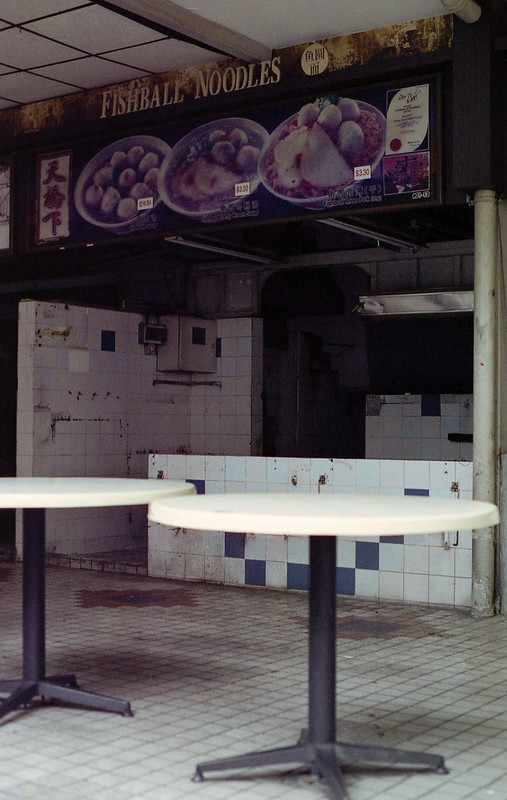 The film was shot at 640ISO and processed at 800; colors are a bit funny as it is a tugsten film, but it has its charm.

For those who are interested I bough the film in the Lomo Shop in Chinatown (16 dollars yuck!)