Finally after 11years of a fulfilling relationship I am letting him go. If you read this blog regularly you probably wonder where this camera has been all that time because I don’t think it appears in a single post over the last 4 or 5 years. Actually checking my papers, I realized I had it service 5 years ago and did not used it much since.

I have carried this guy all over Asia and took so many pictures that it is difficult to pic some to illustrate what looks like a eulogy. Mind you with 42000 actuations, it has not been abused and his new owner can make a few shots with it.

The D700 has been a beast of its own kind, the first and last, prosumer camera, which could handle most of Nikon lenses. It supported the road well and gives confidence that whenever you press the shutter something at least acceptable will go out.

Of course I lugged around big amounts of heavy glass, this is what you get using a DSLR, and spare battery and multiple cards.

The D700 was quickly outdated though, the usable ISO range was limited to 3200, which by today’s standard is pretty low and the noise or banding in low light was not always nice. Hence the purchase of fast glass, 50mmF1.8, 85mmF1.8, and so on. Ok I must say my current digital camera has the same max ISO so that criteria has not worked much for me.

So why did I stop using such a nice camera? Well first I have started shooting more film over the years, and falling in the rangefinder trap, I purchased a digital M 5 years ago and here we are. I must say I do not shoot that much with the digital M outside of travels, events or parties (so not much recently). I generally shoot film for my casual street photography. The M is in no way technically superior to the D700, they are from the same technological generation, but if you are not a pro the experience and the results are more fulfilling.

So over the last period the D700 has been used only to shoot events which now are becoming fewer and fewer so I came to a point where I had the choice to let it rot in the its box or part from it.

During our trip to Chiang Rai one of the most exciting activities available is to walk into Burma, for a few hours only. Driving one hour from our resort in Chiang Saen (already one hour north of Chiang Rai), we arrive in the Mae Sai checkpoint where it is possible to cross the border and enter Myanmar at Tachileik. 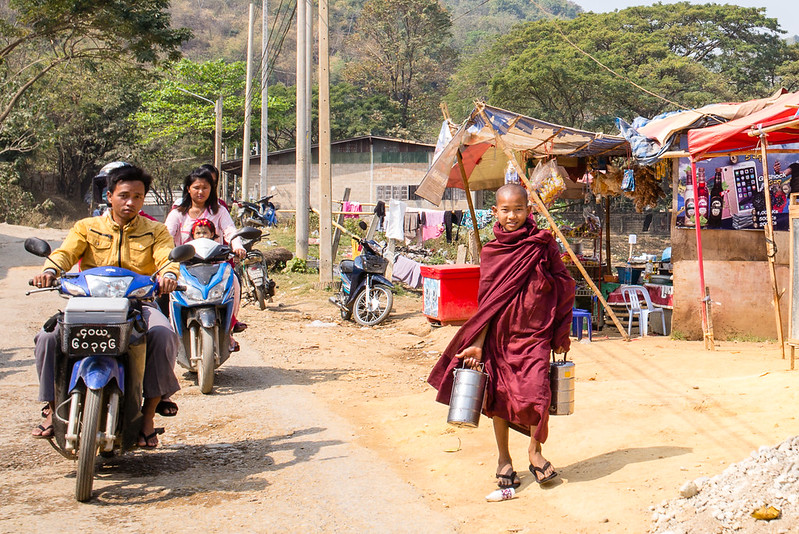 This in the Shan State; Tachileik boasts 50000 inhabitants. 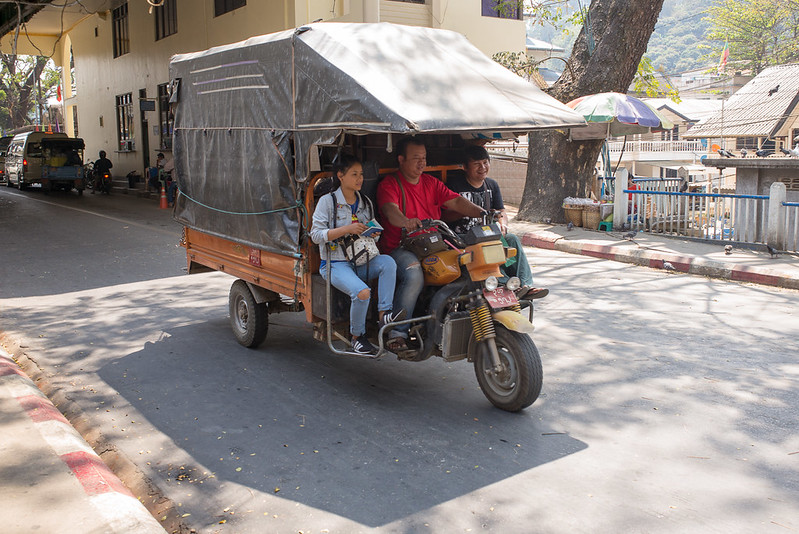 Crossing the border is allowed provided that you leave your passport at the border and pay a nominal fee. Overnight stay is not permitted and I read that guesthouses in the border areas of Myanmar are not allowed to host foreign tourists. 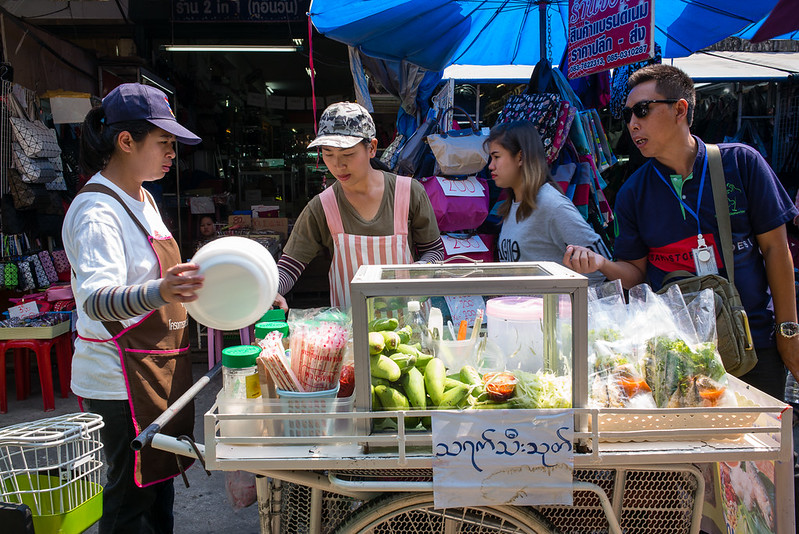 The area close to the checkpoint has a busy market where Thai and Chinese tourists like to shop, for cheap counterweight of handbags, watches and so on. We rode a tuck tuck outside of this area in a more rural side of the city with its food market. 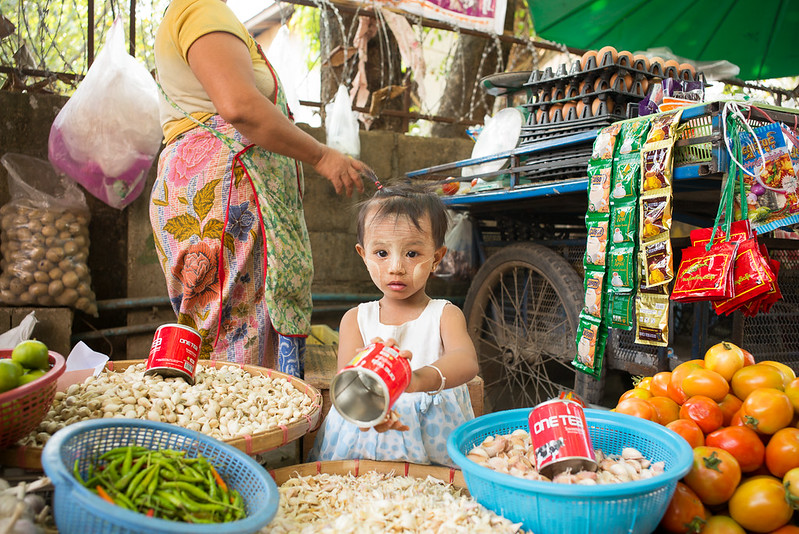 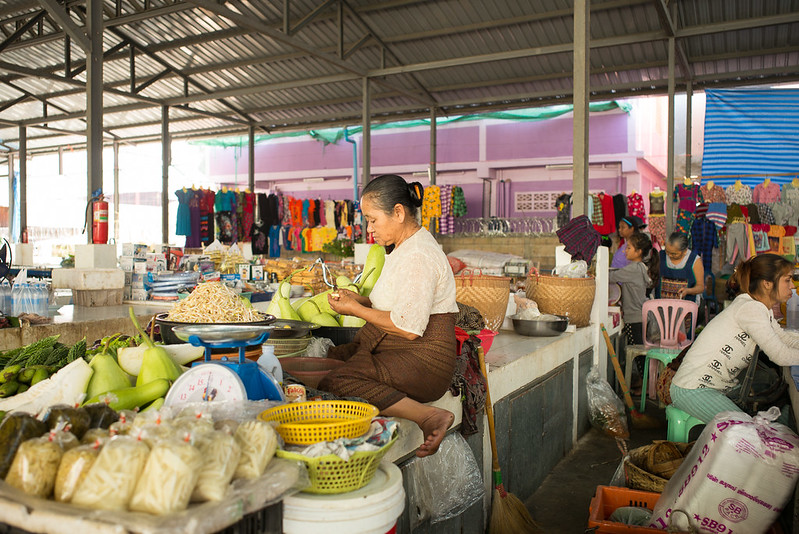 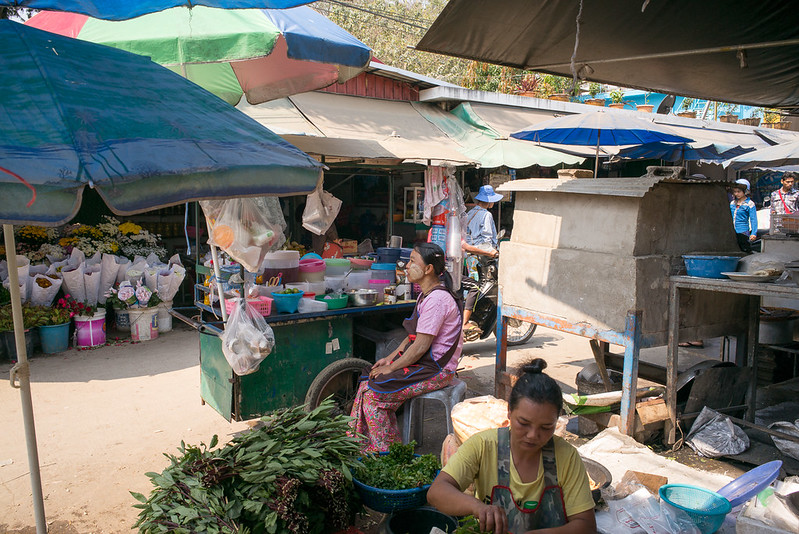 Aside from the usual colorful street life, a nearby covered market, shows more food stalls. 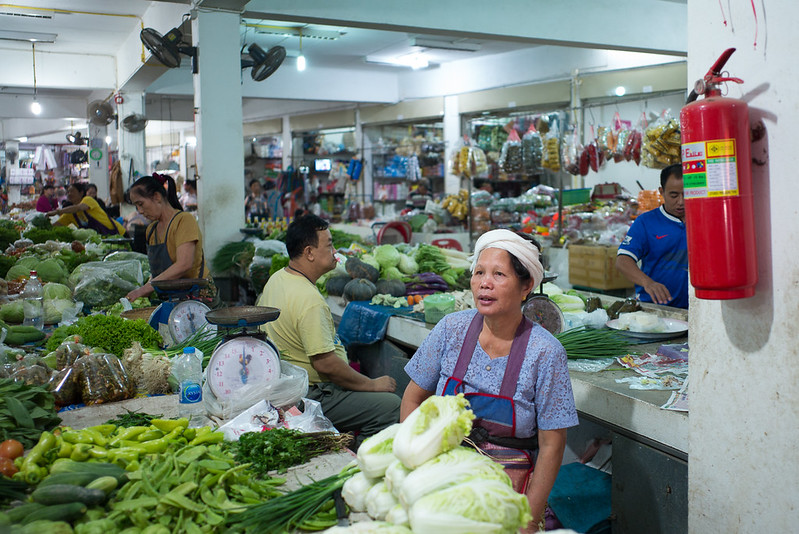 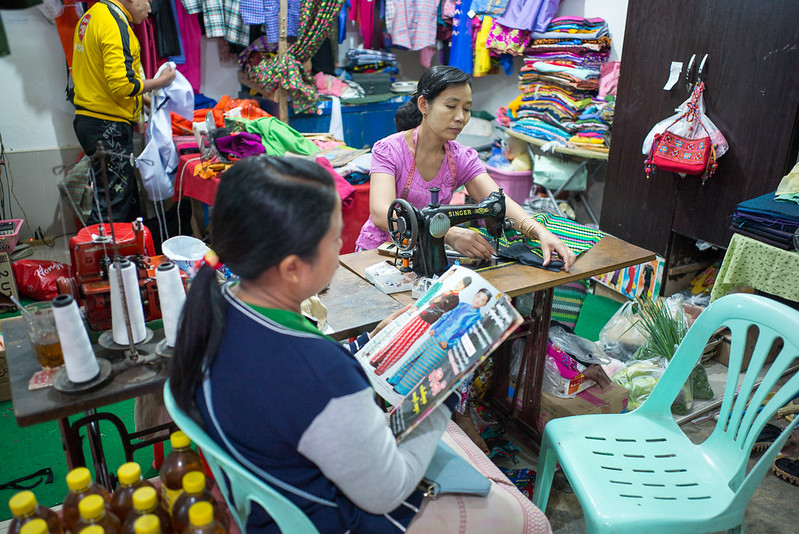 A few streets from there, a Buddhist monastery, hosts young and old monks who were having their lunch when we arrived. There we could witness the ceremonial of meals, who its first, who last who eats what is not eaten by the others. 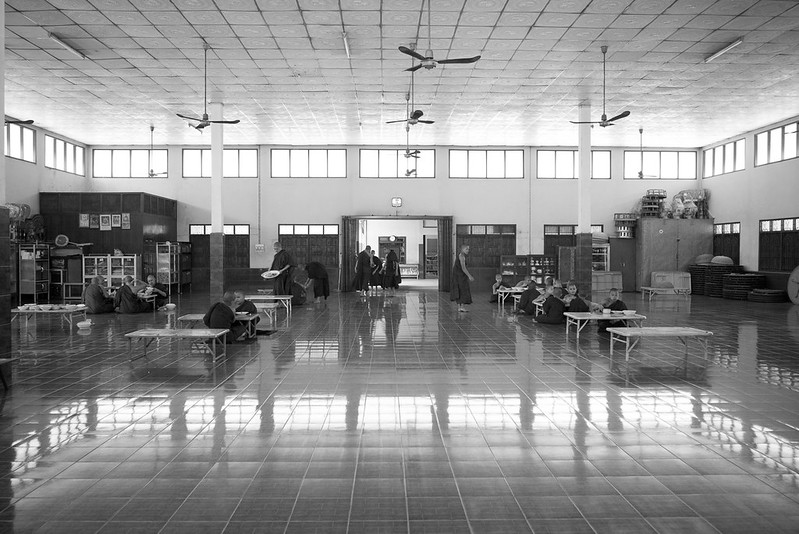 The main attraction in Tachileik may well be the replica of the Shwedagon Pagoda. Situated on a small hill. There are a few tourist / devotee stalls outside and food stalls on the parking. 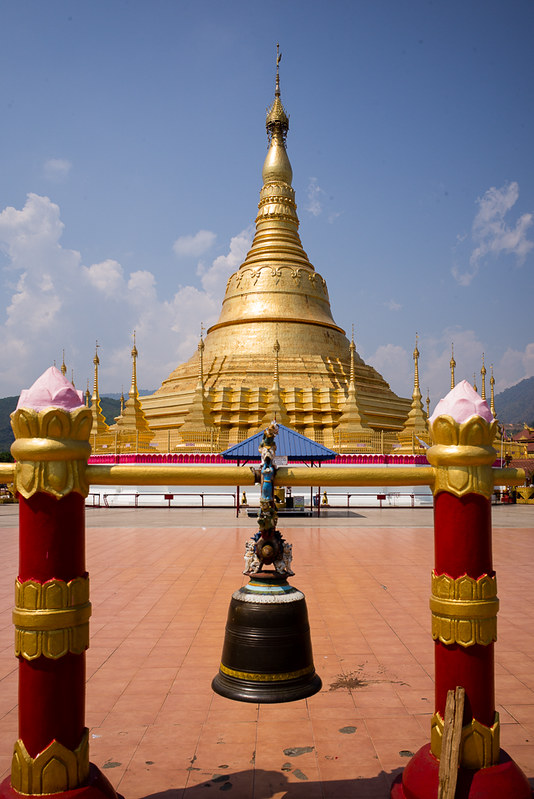 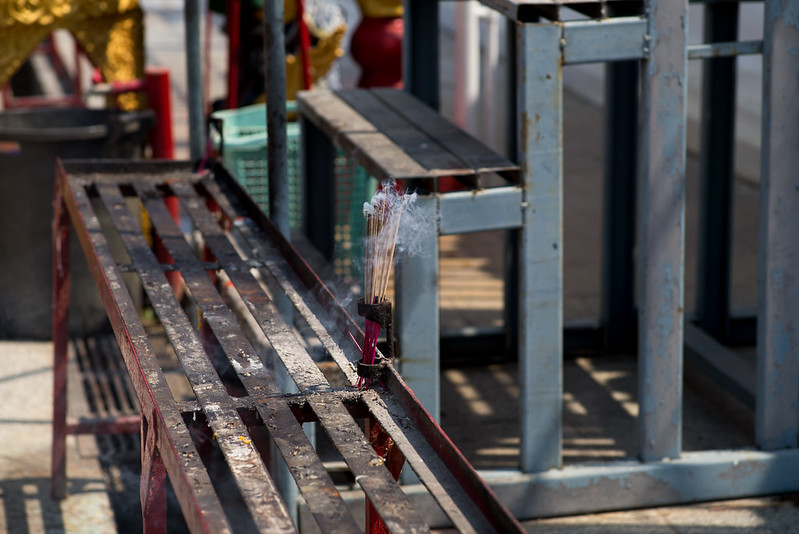 One of the food stalls around the pagoda. 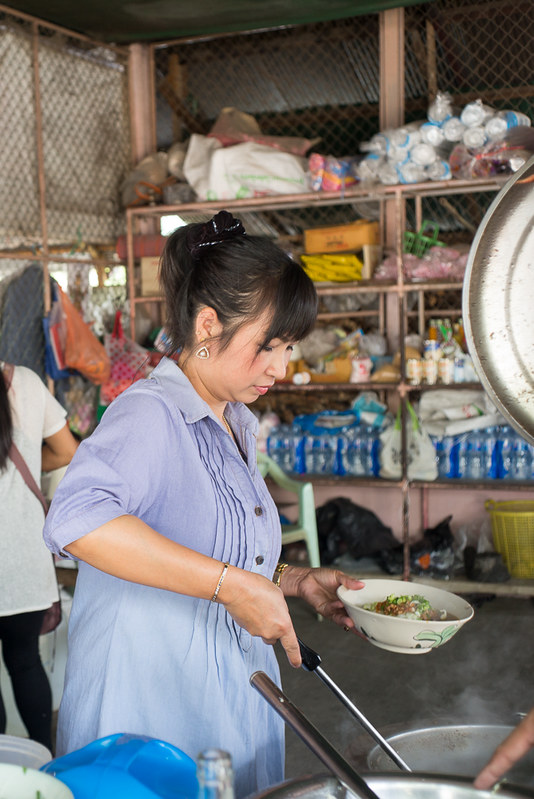 I tried one of these sweet pancakes, delicious. Grilled for you on the spot on the ground of the parking. 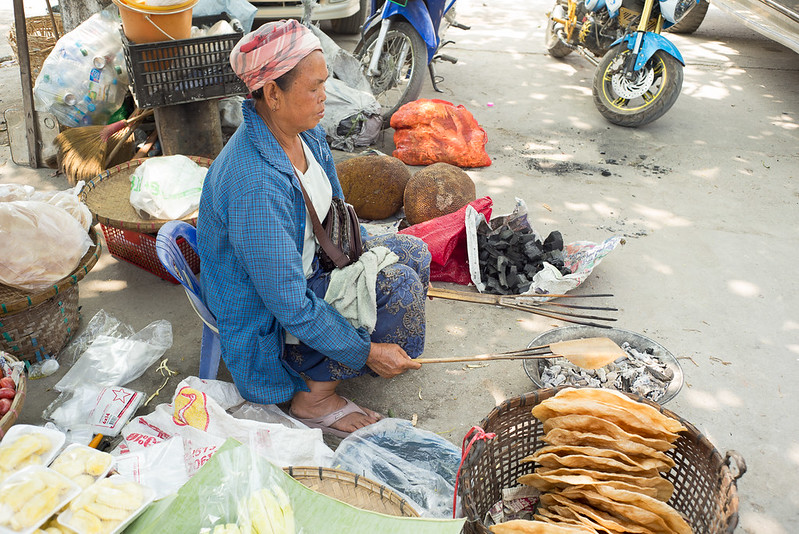 Our guide was very knowledgeable or the area and spoke fluent Burmese which made the experience very enjoyable.

3 hours in Myanmar, a new Stamp on our passports, time to head back in Thailand.

All shots with Leica M262 and Summicron 28mmF2.

A morning in Myanmar 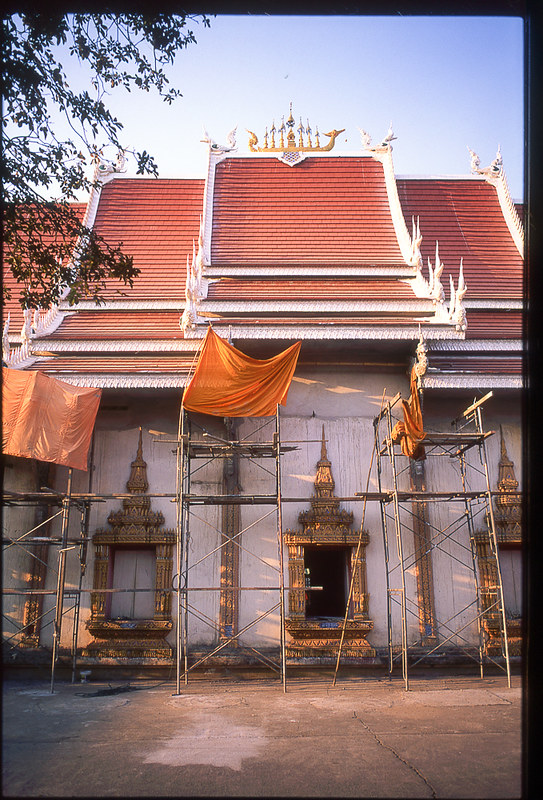 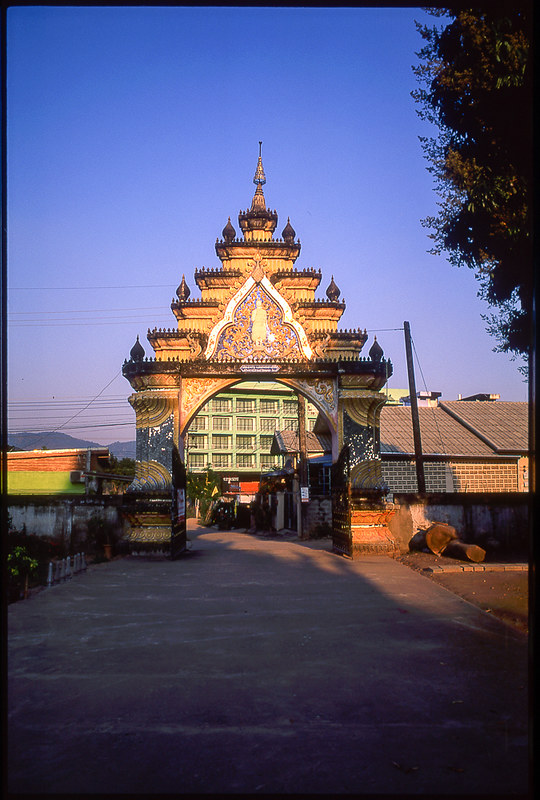 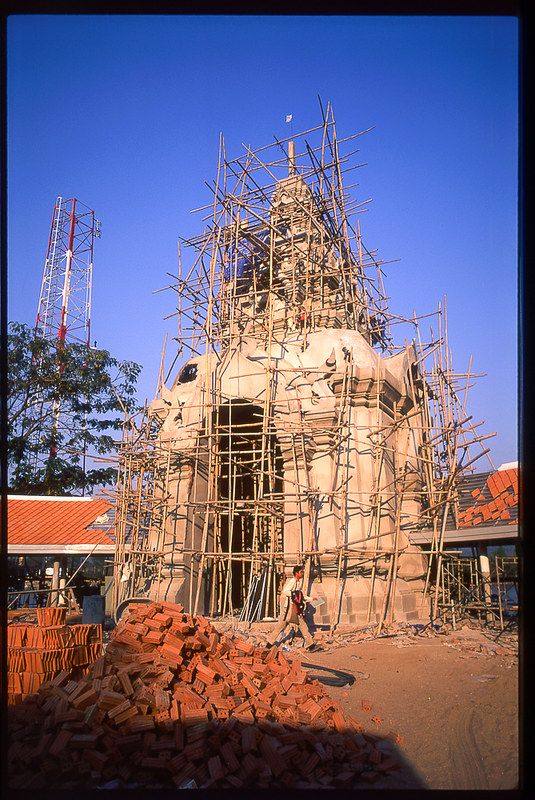 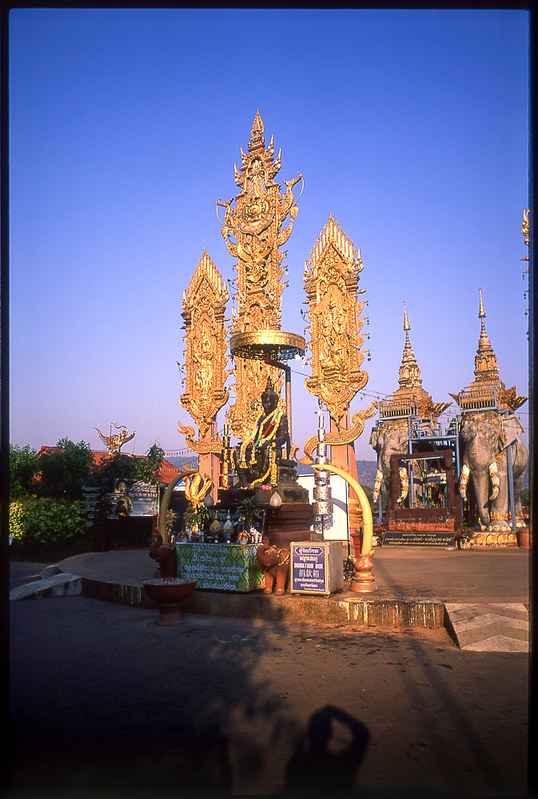 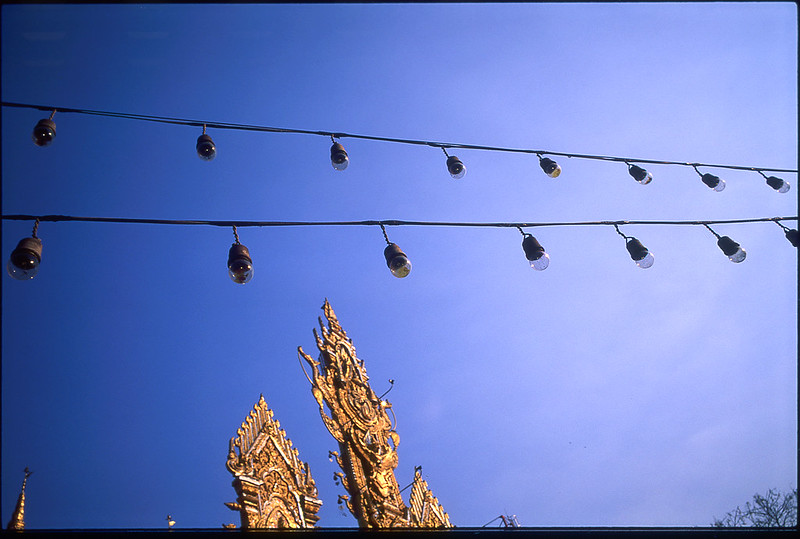 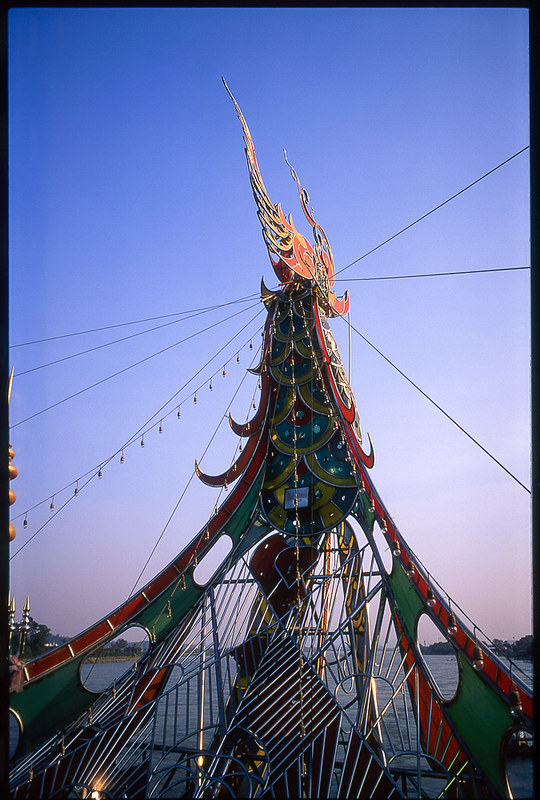 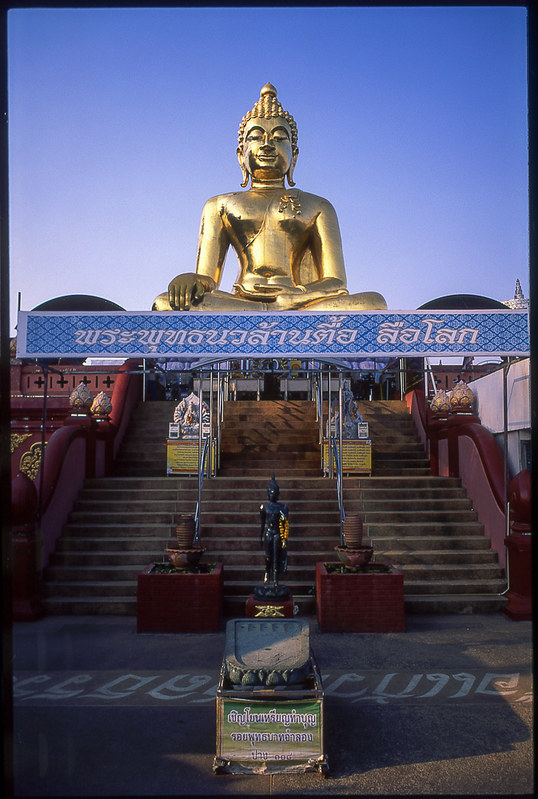 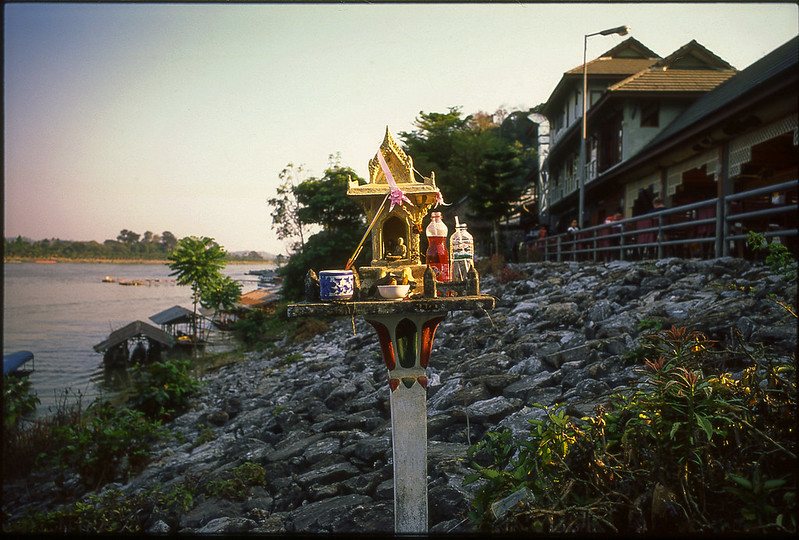 I’m a bit too straight sometime, or shy or whatever. In Bagan, you see old ladies hanging around with their cigars asking you to picture them for money. However low the amount (probably a couple of bucks) I have so far objected to picture people for money, let’s say the idea makes me feel uneasy. I don’t think I am mean or tight, just I don’t think an amateur picture is something that people have to sell you. Well so up to my third day in Bagan without any pictures of cigar smoker, on our last hour we met this woman in a village who invited us in her compound. We exchanged a few polite sentences stayed a bit and she pull our her cigar and I made this shot after asking permission. I did not want to move around and look impolite so the background is a bit burned.

The nuns are more shy that monks when it comes to be photographed, I was very happy when this one accepted in Bagan market that morning.
I like the 50mm which is so in-obtrusive and does not frighten your subject.

Back from a tour outside Mandalay we entered the town by some neighborhoods featuring artisans making different type of crafts. In one of the street were the marble Buddha sculptors. A whole street of them!
I could not resist to have the car pull on the side of the street and go out to take a couple of pictures. This portrait is a half miss but I still like it. This guy had a very special look, full of marble dust, with his mouth bright red with betel juice.

I am not a big fan of extreme processing, but hey, once in a while it can’t hurt.
Looks like it’s going well with the subject.

We met these 3 Shan women and a man in the jumping cats monastery on lake Inle. They were coming from the hills, about 60 kilometers from there and were on a pilgrimage of Burma sacred sites.
Valerie had a row at other tourists which she felt was too invasive picturing them, I just took two quick shots, not wanting to have troubles with the wife.

These people were as much interested in us as we were in them, and we had a quick chat via our guide. The man was wondering if we were wearing “folkloric” clothes back home or if even there we were just dressed as tourists. Good fun and a gentle reminder on relativity of values.

Probably my best picture of Burma. The D700 makes wonders! or maybe the magic air of Inle? I like the quality of the image, that one feels like a slide.