Oh my Oh my. We are in March already and here is my last B&W roll of 2021, where was I? Well not shooting for sure, as I just brought my first roll of 2022 to the lab. Well time flies, photography is one of the losers in the adjustment to my new life.

Anyway, last roll of 2021, shot in December in France, first 4 shots in Paris, next 5 in Cannes, the others in Antibes.

This is a single roll of Ilford HP5+, still hand rolled from the 30 meters roll I bought last year in Singapore. Pictures were taken with the M6 classic with the Elmar 50F3.5 or the Summicron 35 Asph v2. Oh by the way that’s not my last roll of 2021, no no no sir, I quickly shot a roll of expired Portra 400 at the end of December, but I am not sure there are enough shots to share on that one, or maybe yes I ll do next week.

Last black and white shots of 2021

Birthdays have the habit of coming back every year, so for the third time I think I find myself at the TIONG BAHRU QI TIAN GONG temple in the area of Singapore called Tiong Bahru for the birthday of the temple. One of my friends reminded me of the event and I was super happy it was at a time where I could attend.

This is a Taoist temple, a popular faith in Singapore among the Chinese population. I still don’t know much about the Taoist faith and practice, so i won’t try to explain it here. The spirits and gods have  a great place in the faith and they are honored through offerings like Chinese Opera, joss paper bonfires, ..

The celebration involved lions dances, a dragon dance troop, musicians, as above and below. Singaporeans say that Taoist are noisy. I think I have some old shots of the gentleman below.

The person that looks to be the man in charge posing with the lions and some banners.

Meanwhile across the street, the porters of the gods sedan chairs are taking some rest.

I shot 2 rolls of Tri-x (one above, one below this paragraph), one roll or Provia 400H (in between) and hundreds of digital pictures using the magic combo, Leica M6 for film and the M262 for digital; for lenses I brought the 50 cron, mostly on the M6, the 35cron mostly the M262 then. I also brought along the 90mm Elmarit for a few digital portraits.

At that moment the gods starts to be carried in 3 sedan chairs to the place where the bonfire will be lit.

Below some of the carriers of the three sedan chairs.

I don’t know if they are really heavy but the guys are relaying each others regularly.

This write up is about the film shots and should be called “You are all my favorites”. It found very difficult to select between the shots. I have included the shots of the two Tri-x rolls, I will do another small article about the Provia roll which has its own story.

We now arrived at the field where the bonfire will be lit, a small crowed is gathered. Led the the Taoist priests.

One of the gods chair with the idol in the middle.

Back to the monkey god temple

This year the STPI in Singapore had its open day during the Takashi Murakami exhibition “From Superflat to Bubblewrap“, this was the opportunity to kill two birds with one stone.

No need I think to introduce the iconic Japanese artist who uses manga like practice to depict modern Japan. I only had B&W film that day so I did not took many pictures of the art works.

Open days at the STPI (Former Singapore Tyler Print Institute) are always enjoyable, if you have young children they can discover and experiment various print practices, that also work it seems for  teenagers and young adults alike.

For guys (or gals) with a camera, it is a nice opportunity to captures willing models engaged in not so common activities.

The STPI now positions itself as a gallery, aiming to promote the usage of print and paper mediums.

Artists shown in the gallery often have a collaboration with the print makers.

The smiling lady at the printing press has been working there for years, she is now an independent architect ; time flies.

All shots were done with the Leica M6 and Summicron 50mm on Kodak Tri X, at 400 ISO.  genarally shot between F2 and F4 and 1/60s ro 1/12s. The film was processed by Ruby photo (or rather their usual contractor) and scanned at home on Epson v800 with Silverfast.

I generally convert the images to grey-scale and remove dust spots in Adobe Elements and adjust the contract and brightness in Lightroom.

The workshop can also be a treasure where odd objects can be found and pictured for eternity.

One of the DIY items of the week end was an STPI apron.

You can see picture of the last workshop I went to 4 years ago STPI at that time pictures were shot with Canon EOS 1N and 1.8 Canon lens.

STPI Open day and Takashi Murakami: From Superflat to Bubblewrap

I was very lucky last march in Taipei to stumble upon this Taoist ceremony while visiting the Dihua street area with my family and local friends.

I must admit my ignorance of Taoism, so I will not comment much here. Teh following blog post contains quite interesting information on Taoism in Singapore :

Various groups are parading their idols or images of gods around the area of Taipei Xiahai City God Temple.

Most of the groups as below have musicians, Taoism is noisy and colorful, I learned this a long time ago when I arrived in Singapore.

This group has gods puppets dance in front of the temple.

Another group was composed of young people dressed as what looks lie warriors.

This group traditionally rock the sedan chair when the image of the god is carried, portraying their struggle with the superhuman force possessing the chair once the god has come to posses its image. 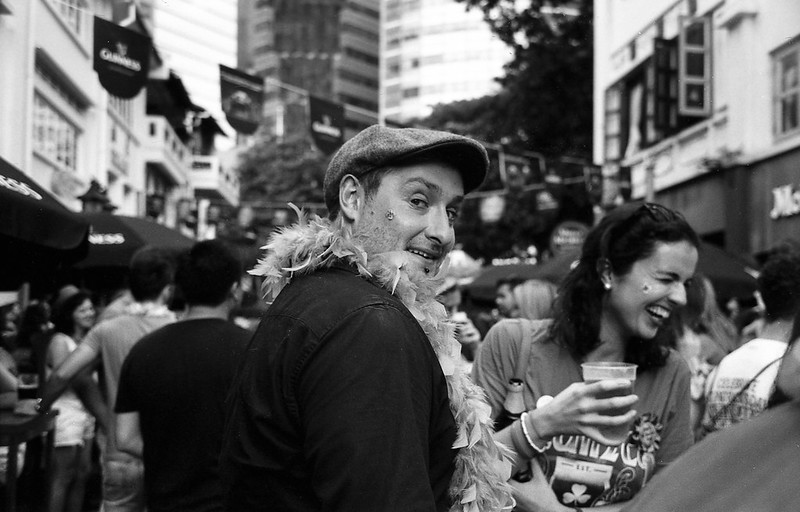 This is my best shot for a lot time. Done with the badly battered Kiev IV and the 35mmF2.5.

This has motivated me to finally change the skin of the Kiev. I have a set of blue leatherette on my desk for 6 or 8 months, it is time to use it.

Below the naked Kiev.

The final look below…. awesome

A not very gifted for DIY so I wonder how much this will last, but for the moment it looks good.

Next time I have to sand paper and paint some metal parts as well.

The leatherette was ordered from Aki-Asahi.com for 19USD, they are nice enough to send me also a black leatherette

The Leica IIIC has shown some defects in the summer after 6 or  rolls shot. One of rolls was showing a white line 3/4 horizontally and one roll from Taiwan was half black. Both defec

ts were characterized by the web and the repair man as issues with the curtains. The repair man was quite frank and told me that well this was a nice camera, but not as much though after as a IIIf, so I may consider if I want to repair it or not. But after much thoughts and a bit of walking into various shops I finally decided to have it done.

I am not sure I would dare give the price of the repair; but let’s say that it is more than what I paid for the body. 2 long weeks to wait (Time ) and here is the beast. The old curtain sure shows some holes and the new one looks …. like new. The body is uber clean and the guy has cleaned the rangefinder and the viewfinder and it’s a pleasure to peep through them.

Now for the story I went to my lab next door and bought a roll for test (Kodak trix, what else) but when I started asking for a pair of scissor to proceed with cutting the lead, one “specialist” showed me the proper way to load the film without cutting … 2 hours and 36 shots later I realized the operation failed ! Damn’it

Also after 36 missed shot and two films (including these pictures) the trigger is locked in depressed position and I have to bring it back to the shop (still waiting for the verdict, but I suspect this may be either something that went wrong during the repair or related to the savage loading).

Anyway, I did a bit of way around with the Summitar 50mm F2 for the first roll and here are some shots.I really like this small camera, but I hope I will get it in a better shape soon.

First picture in Chinese Thanks Giving on orchard road in Singapore

The Leica IIIc is back from the shop

So I was standing in Joo Chiat road with a friend and her children with the Hassie in my hand and this young chap came to me and said something about the camera. I took me a couple of exchanges to get that he thought I was taking pictures for a magazine and he wanted his portrait in there. I did not want to disappoint him but, hey bro, I have no magazine, but I can put your picture on Flickr, my blog and maybe even Facebook, so here you go.

After all this guy had the good taste to associate Hasseblad with professional-magazine-photographer and not with crazy-middle-aged-Ang-Moh ( white guy in local dialect).

I did not use the Hassie since the holidays in Sri Lanka in march but I am frankly amazed by the quality of this roll.

“I want my picture in your magazine”

Yes, digital can wait! My 500 and so pictures from Indonesia taken with the D700 will have to hang around a temporary folder for a while : I collected 2 rolls of films from the shop Monday and I am amazed. How can these 24 shots, painfully taken over a couple of weeks which costs me nearly 1 EUR each please me so much? Well I don’t know really. Probably because of the pain and the cost. Nothing perfect here just 24 shots most of which I have no shame to show; pretty good hit ratio compare to the D world.

Paradox of the day: I had to use a bit of lightroom magic to make film looks nearly as good as digital!