This is  a small follow-up to my former post : A NIGHT TRIP TO SENOKO FISHERY PORT .

These pictures were shot on Cinestill 800T with a Leica M6 with Summicron 35 Asph v2 or 50mm V5. Processed at the lab around the corner and scanned at home with the Epson v800.

I shot the roll at 640 ISO, still I found the pictures being under exposed, unlike the roll I shot in Tokyo last year.

So after the Road Side vegetables market of Toa Payoh we are heading north to Senoko fishery port. There is wholesale fish market providing stock from local fish trawlers, in-shore vessels and fish farms as well as imported sources, and distributes to markets, supermarkets, food courts and restaurants across Singapore

The market is located at 31 Attap Valley Road, Singapore 759908; east to Woodlands checkpoint. It is lucky hat one of my friends was driving otherwise it would have been  difficult to get there and back.

Around midnight the market starts to be busy. Individuals come here for cheaper seafood particularly in this time coming up to Chinese new year.

But the market is also preparing orders for hawkers, wet markets and the restaurants of Singapore.

The place is busy, the ground slippery, that’s a nice small adventure.

You can find different products types, like crabs, prawns and fish from all types.

Each company have its own delimited concrete square , with scales and a boss, noting down orders

The work of others is always a nice show to behold.

People are quite friendly, I did not really go asked not to take a picture, but the place is very busy so mind not standing in the way.

Prawns or shrimps arriving and being thrown to the ground. They will be sorted manually later.

Outside more fish is coming.

Ice is a big business here. 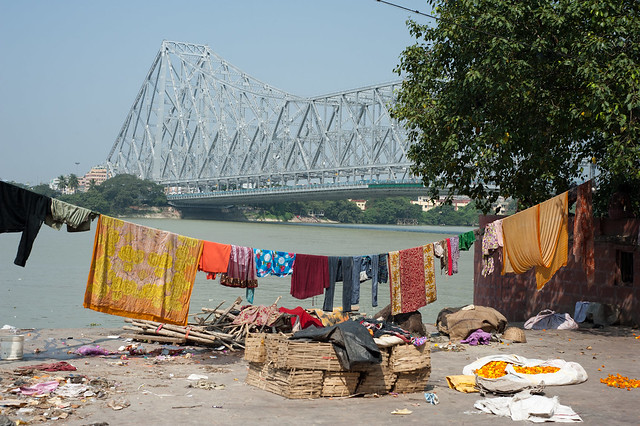 Situated at the southeast end of Howrah Bridge, between the Ganges and the railway, the flower market is a fascinatingly colorful attraction. 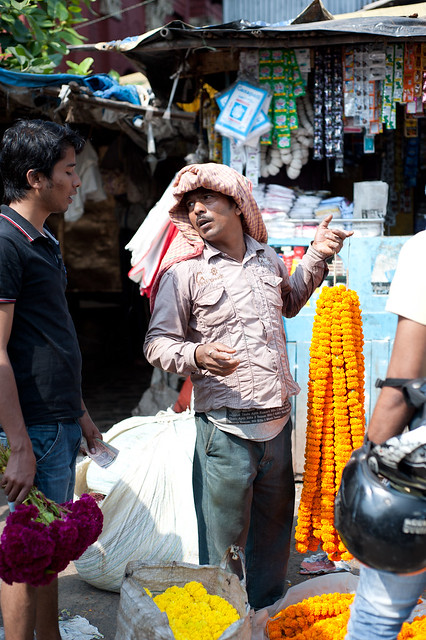 This is a wholesale market, not one where you are supposed to buy flowers as a tourist.

The morning we were there the place was reasonably busy, it gets a bit cramped in the covered area, but not to the point of being unbearable (although I can imagine this can be the case from time to time). 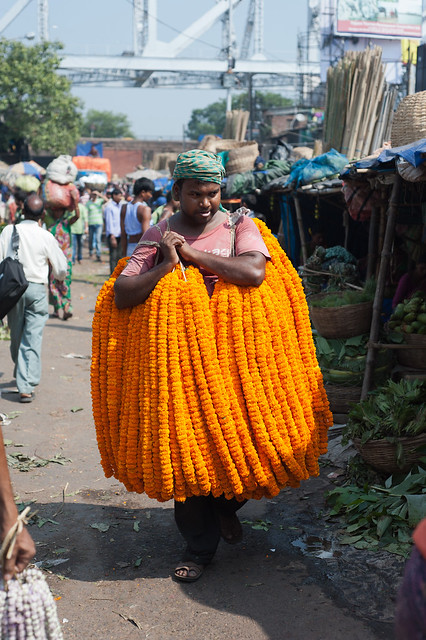 There are plenty of nice spots inside or outside where you can stay without being too much on the way and take pictures. This is a business place, but I think people are ok to have their photo taken, maybe do not shoot at money exchanges. 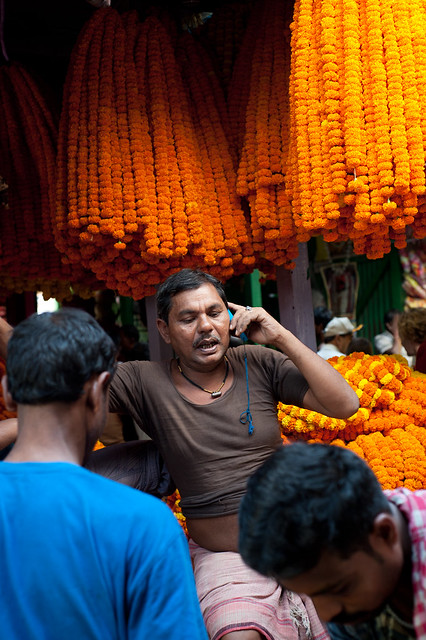 On the way from the avenue to the market itself, you can see the makeshift shacks where many workers live in, but also some small workshops (workshacks maybe?) where people are mending cyclecarts, or making wooden boxes to transport the flowers. 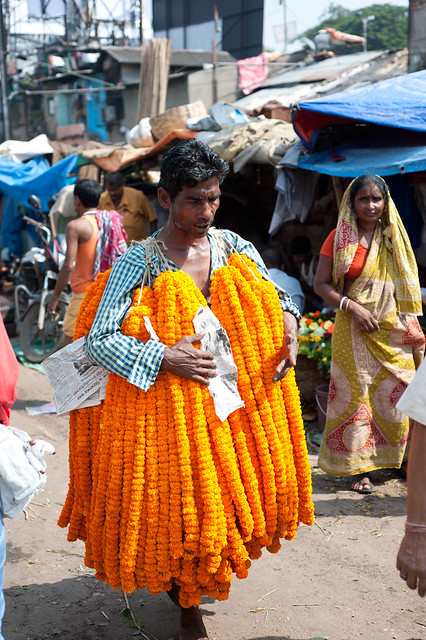 This is the kingdom of marigold. 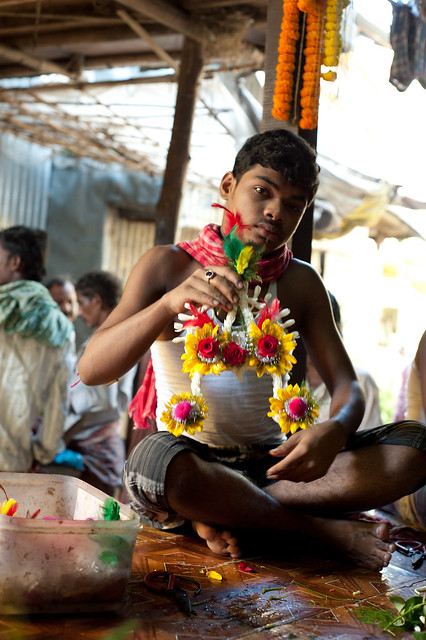 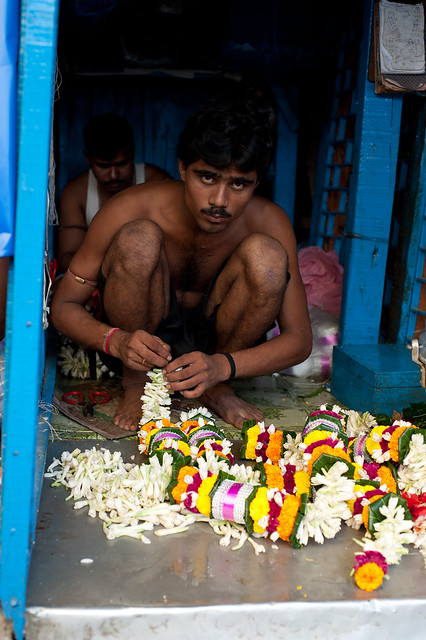 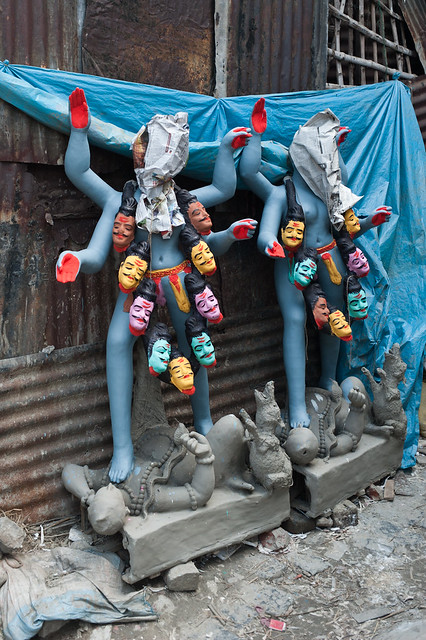 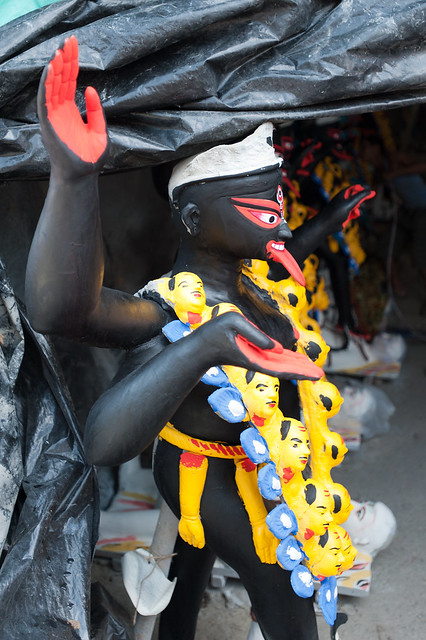 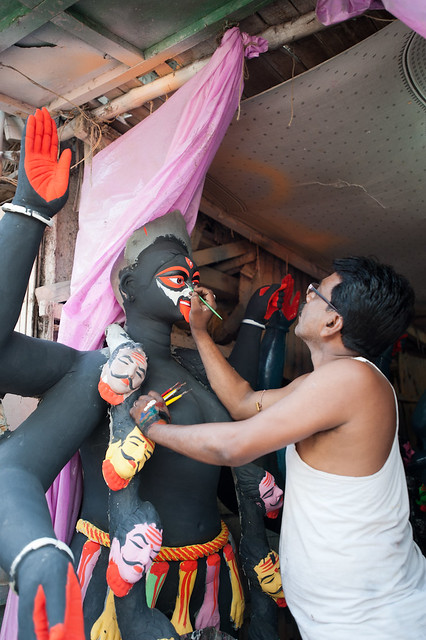 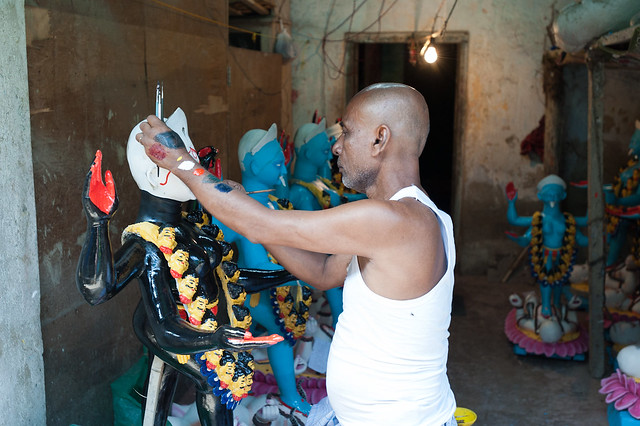 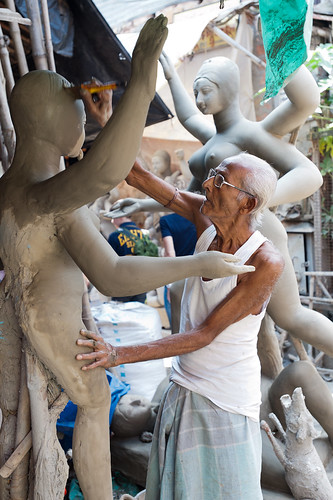 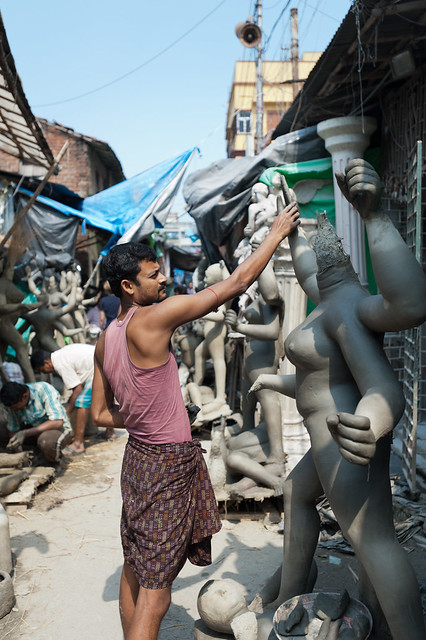 During the Vietnam trip we stayed 3 days on the coast between Hoi An and Danang. We drove all the way from Hué, through the “cloud pass”, through Danand, and passed the Marble mountains to the hotel; all in all a 3 hours drive. On this part of the coast fishermen are using round basket boat; I saw a few or our drive but they were a bit far off or we did not have the possibility to stop to investigate and take some pictures. So I was a bit frustrated when getting to our resort; I’m not too much of the sea-side photographer and anyway the weather was not so good.

Walking along the beach, what was my surprise after getting out of the resort to see a group of these basket boast ashore; I had to ran back to the hotel get a camera and snap a few shots. The next morning I was back and so the next evening; in both occasions when I spotted the guys rowing back to the beach. They have me pay for my taking picture by asking me to help carry their boat out the water, which I found a very fair trade.

So May Day came along and a Flickr group organized International Commie Camera Days 2013; a day of celebration for the workers united and an opportunity to get your Russian camera out of its box. So the choice is between the Zorki or the Kiev or both, but at this time I already have received the LeicaIII and some new LTM and have a few rolls on for testing so I’ll keep it simple and pick only one camera and it is the Kiev. The Zorki rangefinder is still not repaired so until then it way stay in the box.

I picked up the unloved Ilford Pan 400 ISO for this “assignment” and In order to get ready for it I have sealed the leaks of the Kiev 4 with masking tape as shown on the last post and made a bit of decoration after loading the film of course.

Discussion on the group gave a bit of flexibility on the definition of May Day and the range was extended from 1st to 9th of May; but I decided to try stick to the 1st of May and/or work related stuff.

I can recognize English, Malay, Chinese and Tamil; the last one I hesitate between Thai and Burmese

All in all this is only the 3rd film for the Kiev and I must say I am quite pleased with the result; including the B&W quality of the Ilford PAN. I’ll post next the first part of the roll shot in old buildings in Wessex Village in Singapore of which I find the B&W just amazing. Ah and I think I am nearly on target for “a film a week in 2013“; another stupid and funny exercise.

So here I am back from Sri Lanka! We did a big tour in only 10 days and that was far too much. The country is big (bigger than Singapore for sure), and there are so many interesting things to see. We mostly visited the archaeological remains and Buddhist monuments from the center, the tea plantations, the beautiful Fort Galle in the south before a quick tour of Colombo.

I disappointed myself on the Hasselblad this time, I only managed to take 3 rolls, including 3 or 4 ruined pictures, but that’s life. We did a lot of driving and did not have much time to wander around in villages and towns. I could not resist to post these two which are the best of the first B&W roll.

These Hindu women picking up tea leave in a plantation close to Nuwara Eliya. They are refered by our Cingalese driver as “Indian Tamils” by opposition to the Local Tamils. They are people who came from India (or so did their ancestors) to work in the plantations, I understood that they are not migrant workers as they tend to settle down. (well that’s what was told).

This was in Patan south west of Kathmandu, on the Durbar Square; three women were working on a part of the palace that is under renovation. Two carrying bricks and one loading their baskets.
This picture lack sharpness, probably she moved a bit or I shook my camera; however I like it very much. I like the tiredness of the face, I like the feminine touch of the necklace and the watch. Damn if only if only it could have been sharper!

I’m going through the pictures of our Christmas in India, here is a happy low light street shoot, in this spice grinding shop in Alapey (Kerala – India).
Thanks to the D700 capability and the wide aperture of the 50mm. Nice guys I met in Alapey, everyone smiled and said ok when I asked to take their picture.