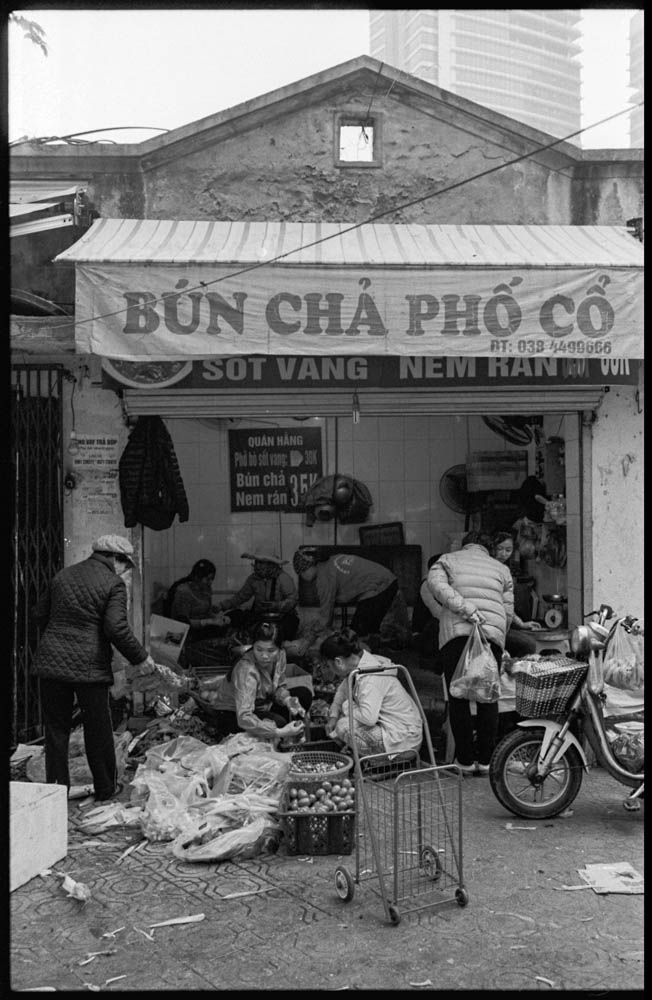 This is a follow up of the first roll shot in Hanoi (here). On the way back to Sapa, we stopped in the area from Hanoi which is close to the lake for a single night, lucky enough thee was this nice market next door. 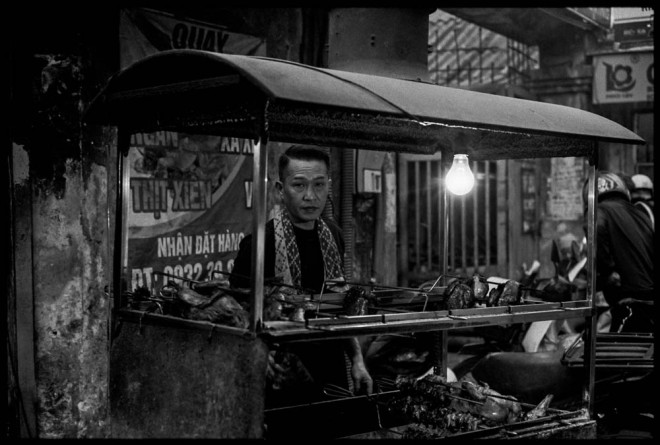 Best shot of the roll was the first one, on the evening of the arrival, this man was barbecuing meet outside of the market. 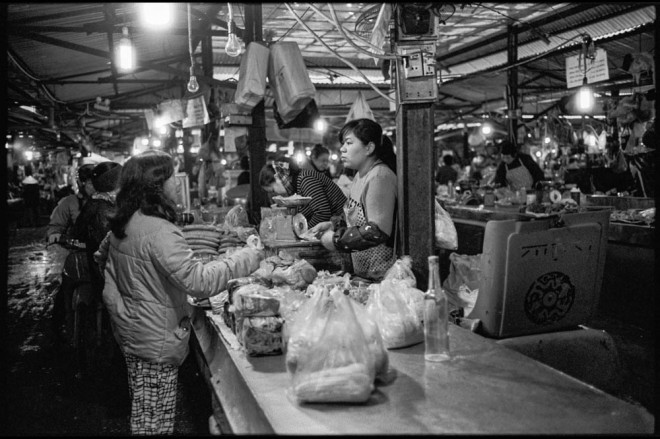 The market is small but large enough to shop with your moped. 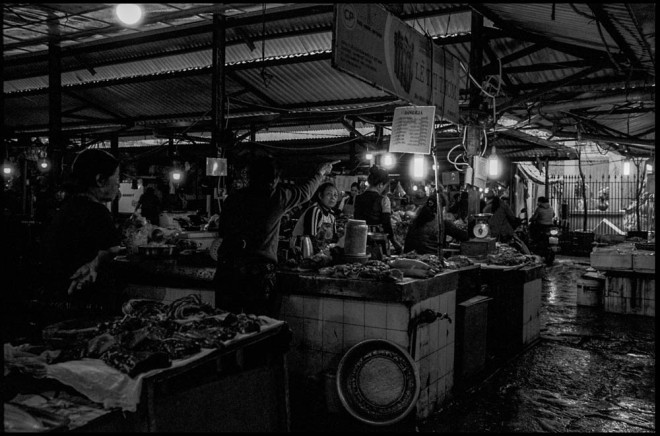 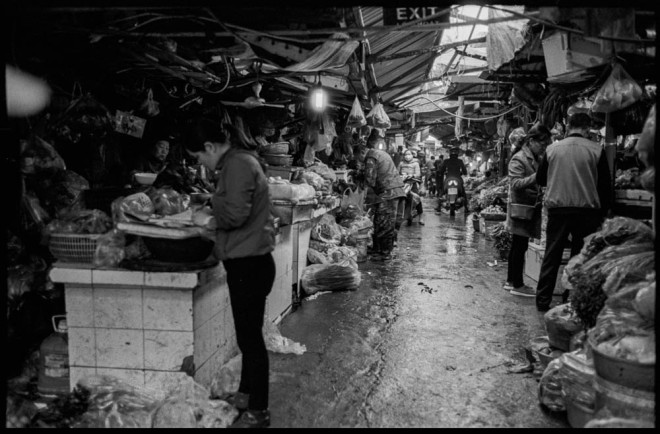 The market though small has several entrances making for interesting lights (not that I may have used it).

Outside the market the area is very lively with street sellers, small shops and all.

On the fringe of the old quarter this is a nice area to visit, a lot of small hotels, shops, an further out you can walk to the lake are.

Hanoi is a great place to shoot. People are friendly and generally not photo  adverse. There are so many pictures to take, that if you cannot take one, just walk to the next.

As usual, the M6 is most often mounted with the 50 cron, that ensures a reasonable distance for candid shots.

Street side food vendors and their patrons are still a great subject.

I was last in Hanoi 10 years ago and the traffic has not changed, crossing the roads still feels like an adventure and motorcycles are omnipresent.

We arrived late on Christmas eve, so our first outing was a walk to Saint Joseph Cathedral on Christmas day. The mass was already going on when we reached and people were standing outside of the church. 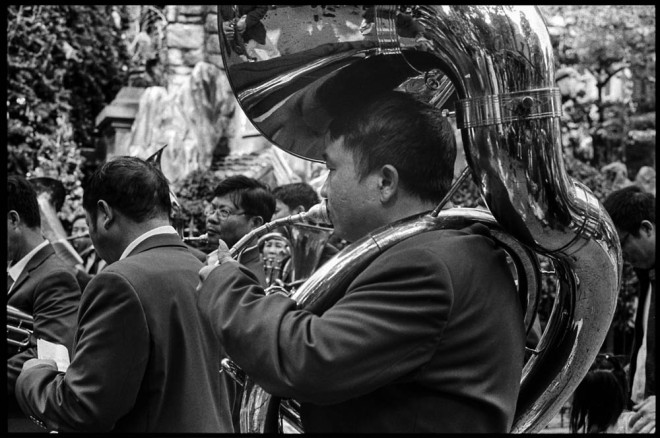 After the service an orchestra was playing outside. 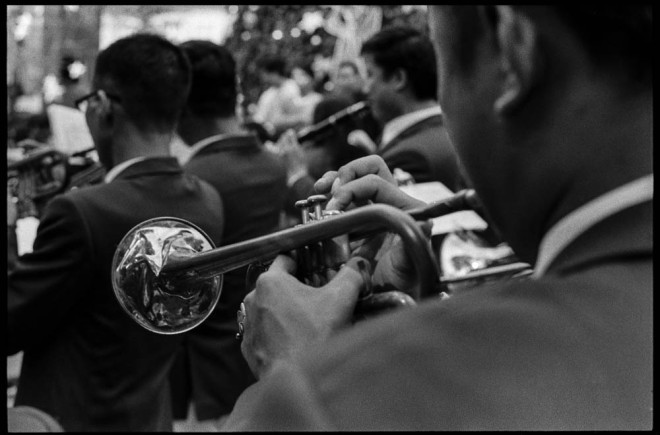 A good opportunity for selfies.

We walked down to the Metropole hotel, where the two Citroen below are standing guard. I stayed there 10 years ago, and at that time  they could be sent to fetch you from the airport in style.

We then walk north in direction of Long Bien bridge, going through the old quarter. 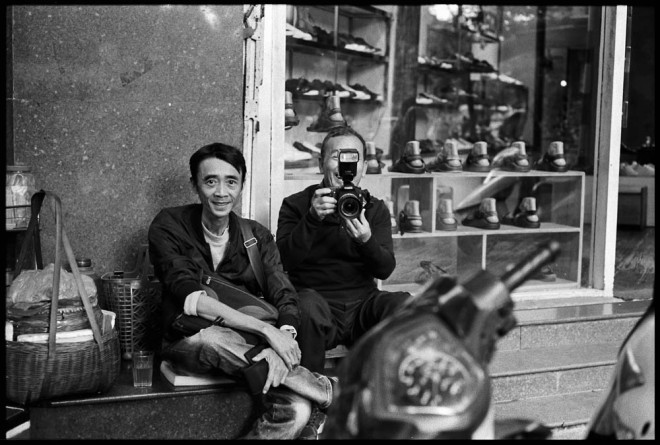 Among many, I met these local photographers and we took shots of each others. 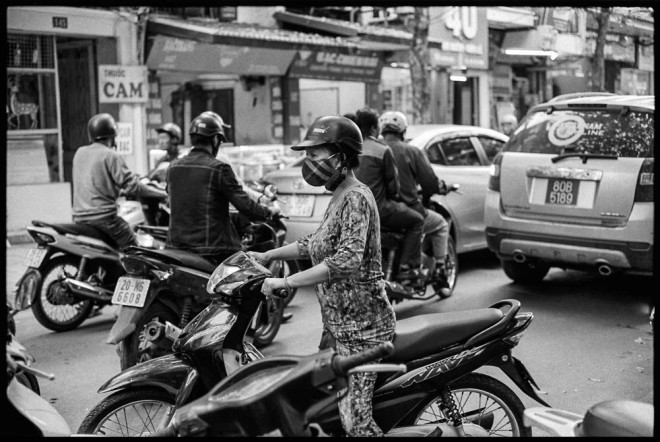 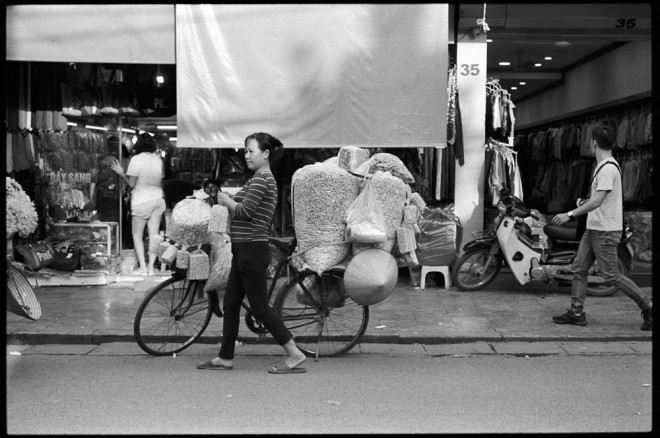 Finally we made it to Long Ben bridge.

Where I met the two young film photographers below.

Hey this was a long post. Be reassured the next roll is not as good.

Hoi An, is a beautiful and very touristy; but it is still full of local life. Street food, food stalls, … there is a lot of photo opportunity and you may well pretend you are the only tourist around. This is selection of film shots done with the Hasselblad 500 CM. Color shots with Kodak Portra 400 and black and white with Kodak tri-x. I have two backs and I think it is safer to carry same sensibility film to avoid messing up with the exposure on the heat of the moment.

Actually talking of the hit of the moment, it happened a couple of times already that in the excitement of having taken what I believe was a good shot I hit the rewind crank instead of the winding knob and end up my roll after just a few pictures. Silly me ! Well as least now I have identified the issue and will try to behave in the future. 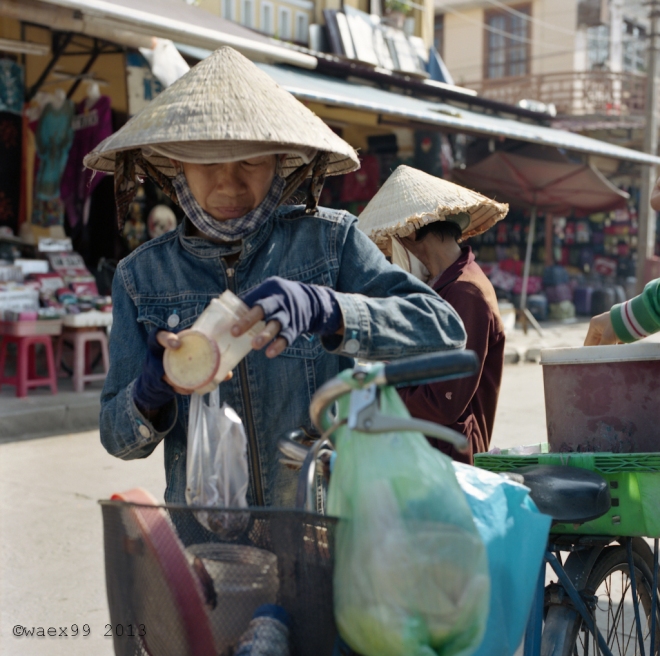 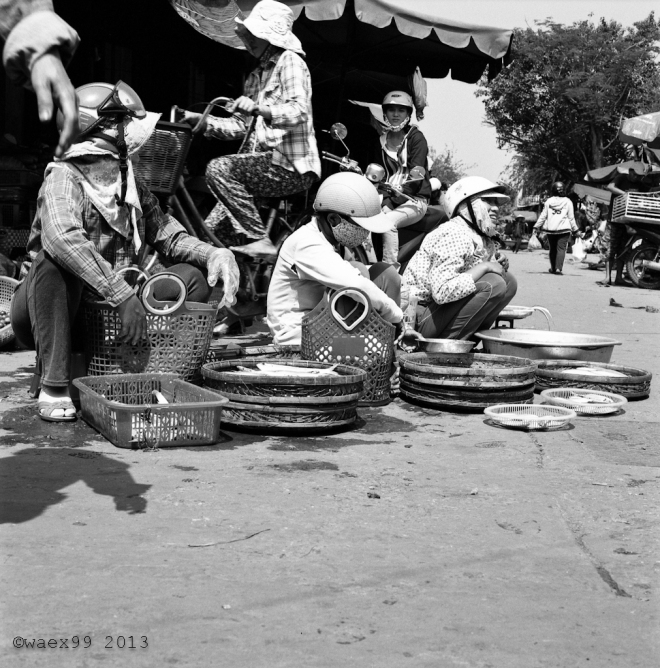 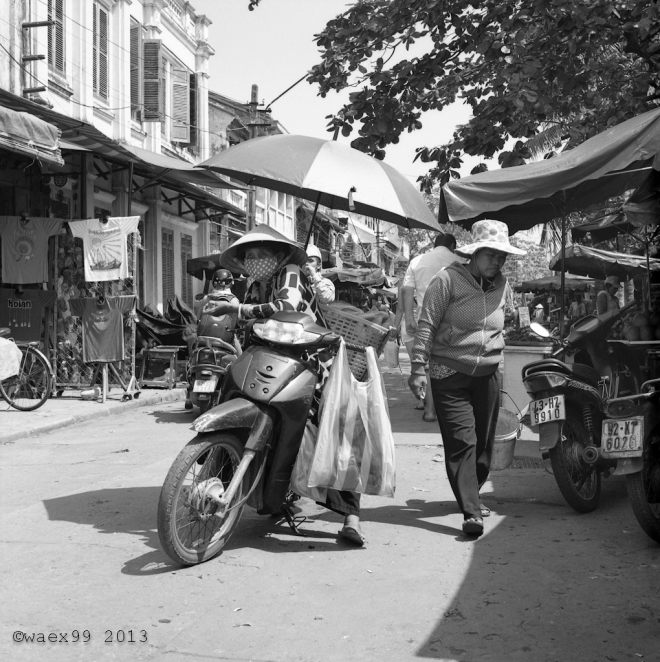 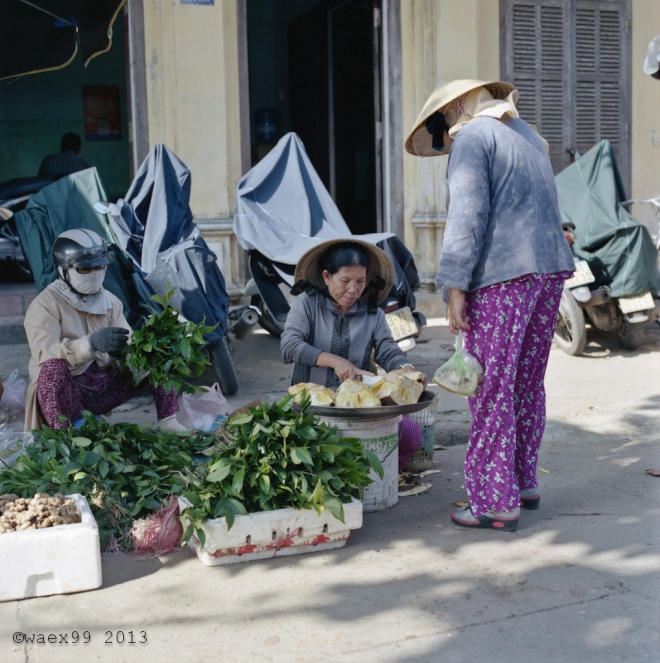 On a side note, as in Cambodia, the conic hats does not make it easy to picture people faces.

During the Vietnam trip we stayed 3 days on the coast between Hoi An and Danang. We drove all the way from Hué, through the “cloud pass”, through Danand, and passed the Marble mountains to the hotel; all in all a 3 hours drive. On this part of the coast fishermen are using round basket boat; I saw a few or our drive but they were a bit far off or we did not have the possibility to stop to investigate and take some pictures. So I was a bit frustrated when getting to our resort; I’m not too much of the sea-side photographer and anyway the weather was not so good.

Walking along the beach, what was my surprise after getting out of the resort to see a group of these basket boast ashore; I had to ran back to the hotel get a camera and snap a few shots. The next morning I was back and so the next evening; in both occasions when I spotted the guys rowing back to the beach. They have me pay for my taking picture by asking me to help carry their boat out the water, which I found a very fair trade. 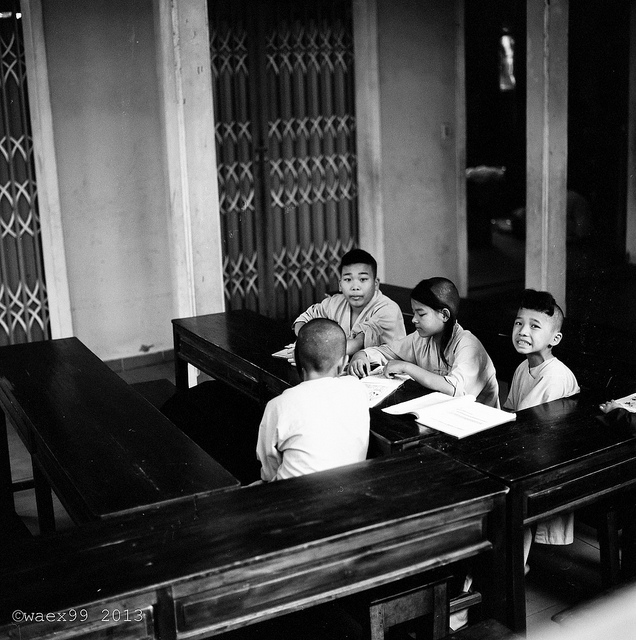 I realize it’s been a long break; my last post dates back from the end of September! Like many other people I have been busy; nearly two seeks in Vietnam, kid going back to school, seeing friends, walking around with a camera and a bit of work, in a word: life.

So Vietnam was our last destination, we spent 10 days in the the middle and south part between Hué and Ho Chi Minh city aka Saigon. Weather at this time of the year is not great and actually it is the start of the bad season. We had a lot of rain in Hué, but we were quite lucky in other places.

Camera wise I slightly modified my usual kit and brought along the Angenieux 70-210 F3.5 AI lens instead of the Nikkor 80-210 F2.8 AF. The reason is that I wanted a lighter kit that fits in a back-pack I borrowed from a friend. Yes I was again wondering about a new bag bt could not make up my mind so I decided to try a back-pack instead of taking along the Crumpler 8Mio back (which is no longer produced it seems). I could fit in the bag:
– the Hasselblad 500M with an extra back
– the D700
– the 50mmF1.8D
– the 17-35mmF2.8AF
– the Angenieux zoom

There is enough room left for the lonely planet,the light-meter, a couple of films. The rest of the accessories goes in the checked luggage, including spare film.

As we traveled “free and easy” (meaning we did not have our own car and driver all the time) I enjoyed the back-pack very much as it enabled me to carry all my stuff around all the time. On the down side, even if this one (Lowepro 200 something) has a kind of “Sling” feature, it is not as practical as a shoulder bag. So I think I will have more crisis of looking for the perfect bag in the future again.

Oh the picture, this is one of the first of the film shots, these kids are little monks in the Thien Mu Pagoda in Hué. This pagoda is famous for its 7 levels tower, but also for the monk who drove from there to Saigon to set himself in fire in 1963 in protest against the government.